Second race Snetterton, motoring news reported "antics of Bill McGovern and Gerry Marshall at the esses blanched the faces of even the most hardened spectators" Cooper 'S'

Second race Snetterton, motoring news reported "antics of Bill McGovern and Gerry Marshall at the esses blanched the faces of even the most hardened spectators" Cooper 'S' 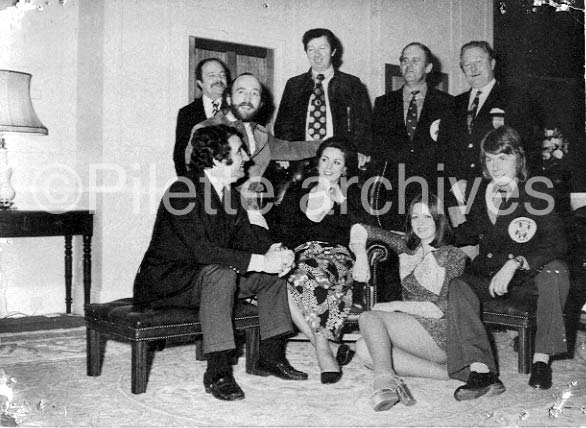 found by 'Pils1989' in the Andr Pilette archive with "Paul Emery" written on the back
Paul Emery is the man on the extreme right of the rear row.
Emery looks to have a BRDC badge on his blazer.
and the tall guy with the big spotty tie is Bill McGovern who'd driven Paul Emery's Imps a few years before that photo seems to have been taken.
The guy on the left with the beard is Martin Hone, one-time owner of the Opposite Lock Club in Birmingham. The badges on the blazers are the logo of that Club. Suggests the photo may have a tie up with a Racing Car show held at the NEC. [source: forums.autosport.com]

doc knutsen: the rallying and racing regulations of the day differed somewhat, with rallies staying Gr2 and circuit racing going Gr5 from 1966. Rootes did not homologate much in the way of hot parts for the Imp, after it was homologated for Gr3 as a 998 car (primarily for rallying).. The British touring car championship was run for the much more liberal Gr5 up to and including 1969 and the process of homologating such things as front disc brakes for Gr2 was not done until 1970, leading McGovern to start the 1970 campaign with front drums. However, by April of that year, Chrysler UK had gotten the key parts of the 998 Imp Gr2 package homologated, enabling the Bevan Imp to score its famous title hat-trick.
[source]

In 1971, at age 34, Bill McGovern did not have high flying carreer plans anymore. His wife, his four daughters and his shop with vintage furniture limited his region of activity. However ...
Furthermore he was an extraordinary test driver, who could report on the slightest change in tune or handling, which made the job for the tuner much easier.

NCR Trophy Brands Hatch, 30 August 1971
John Turner managed 1 m 53.8 s in only a few laps on Monday, the Guys Automobiles Imp breaking a camshaft after only a handful of laps. The all-Imp eighth row was shared by Trevor Willcocks (1 m 55.6 a) and Melvyn Adams (1 m 55.8 s) while the Minis of Bob Riley, Mac Ross and Bob Jones were next up with 1m 56.0 s, 1m 56.2 s, and 1m 56.4 s respectively. Adrian Webb (Imp) and Jeremy Nightingale (Escort GT) did 1 m 57.0 s while Mike Drinkwater led the rest with 58.0 a. Littler pulled up well to take ninth ahead of the ultra reliable Bevan Imp, although McGovern did seem to slow towards the end with a suspect doughnut.

caption by Frank: The Bevan Imp of McGovern, British champion for years, finished 14th; the other car was on the reserve list.
photo by Robert Clayson, no permission asked, but Frank says he does not mind.
Graham Robson says about George Bevan on page 295 of Rootes Maestros, chapter Imps in the BTCC: "His car - there was only one machine, by the way, which was used for for all three Championship-winning seasons - [...] " - after seeing this photo I am not sure what he means. Maybe that the reserve car never saw actual action...

Brands Hatch International Circuit, Kent, Great-Britain
19 March 1972
Bill McGovern in the 1-litre Bevan Imp dominated the smallest class - could this be the start of a championship hat-trick for the team?

Motoring News:
A caption in Motoring News a couple of weeks ago has offended Imp ace Bill McGovern, who tells us that nobody ever outbrakes him and wants us to apologise for suggesting such. Whatever, Bill won the 1-litre class with the Bevan machine by 17 seconds from Mo Mendham's Mini. The result put McGovern and Matthews into the joint lead of the Championship

By winning the 1-litre class again Bill McGovern moves into a clear lead in the Wiggins Teape Paperchase, for Dave Matthews crashed his Escort and thus spoilt his points record.

No drama in the little class: Bill McGovern just got on with the job of scooping up yet another maximum point score in search of his third Championship title in the George Bevan Imp.

Round 7 of the ten-race Wiggins Teape Paperchase. It was a race of attrition and there were only 15 finishers but Bill McGovern kept up his unbeaten record this season with the George Bevan Imp in the 1-litre category.

In the closing laps, McGovern closed right up to Montague but just failed to take him. In the smallest class, Ivor Greenwood (Imp Sport) was the closest to McGovern but by the finish he had been lapped by the leaders.

Gardner, Matthews, Buncombe and McGovern had already won their classes in the championship before the event, but in any case, all four won their respective sections.

In the British Touring Car Championship, he gained 36 points for Team George Bevan, which was a 7th place.

Les Nash set a new lap record in his ex-McGovern Imp, despite which he failed to beat Bill McGovern by the tiniest margin.

Bill McGovern stayed a while at the National Weekend of The Imp Club after presenting Rosemary Smith with her trophy.

furniture shops: at the Belsize Road shop in Kilburn, NW6