Based in Cheshunt, Hertfordshire

A single seat historic racecar, one time Formula Four Championship winner with an Imp engine and a Hewland gearbox.

It goes at speeds beyond 8500 rpm without mishap.

Jean McGarry: Single seater Vixen VB for sale. Hillclimber.
The car is owned by a neighbour of mine, so I don't have the details to hand, but I know there is a spare set of bodypanels and another spare nose cone and a master-mould for the nose cone. I have also seen its pink RAC logbook which makes it eligible for racing.

For 1969 Vixen announced their new F4 car would also be raced in Formula 3. They planned it to be a spaceframe design with conventional suspension and a wedge shaped body. By July '69 they said the car was nearly ready to race and would be pedalled by a well known F3 driver. Unett already had a brief go at Fomula 3 using a Lotus 31 in 1967, and he started to develop a Holbay powered car for Vixen. However, Unett crashed the car at Silverstone on its first test and that's as far as the project got.

When the Vixen won the Formula Four Championship, Rootes used it (Feb. 1969) in their Sunbeam Imp Sport adverts, saying the Sport and the Vixen shared the same basic engine and suspension:

The one without mudguards is a Vixen Imp. Currently Formula Four championship winner. The one with windows is a Sunbeam Imp Sport. Very comfortable, very quick. And blessed with the same basic engine and suspension as the Vixen. If you can call an ally-head, twin carbs, 10:1 compression, 55 bhp @ 6100 revs and up to 90mph basic. Though with the Imp Sport you get four seats, superior interior fittings, and of course 'the ususal Imp advantages' to quote Cars and Car Converions. For only £733*. The Sunbeam Imp Sport. A wolf in sheep's clothing.
* Ex works price, inc. p.t. Seat belts extra.

The Vixen was entered in a E-Bay UK auction on 23 November 2001. Asking price: £6,000. The bidding ended on 27 November with still no bids made. The seller ended this listing five days early because the item was no longer available for sale.

1967 Vixen VB1 Single seat rececar.
Running a correct Hillman Imp race engine mated to a Hewland MK9 gearbox. This car has its correct pink RAC Logbook and is a privately owned car. Currently set up for hillclimbing but only slight modification required to return it to a track car (ie: set up the suspension and change the fueltank).
There is a full set of spare bodypanels and a very useful master-mould for the nosecone should the next owner have a mishap. I would prefer to sell the bodypanels with the car but might consider letting the car go on its own and sell the bodypanels at a later date.
This car is known in racing circles and at one time raced in New Zealand. Starts easily and runs sweetly. Looks very like a Cooper. This is a pretty and correct Historic racing car. Happy bidding.
Thame, Oxon

During the 1972 season Duckhams sponsored the three Huntsman Garage prepared hill climbers. They had a total of 49 class awards between them, including 29 class firsts, using Duckhams Q20-50. The Huntsman Team was based in Downend, Bristol. It consisted of:

The most successful of the trio was the Vixen, which gained no fewer than 14 first places to its credit. Apart from 14 wins, David Franklin had six class seconds and two class thirds. Also, he held class records at Wiscombe Park, Pontypool Park, Loton Park and Presott during 1972.
The photo was taken at the Prescott hill climb. 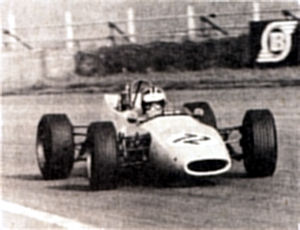 Many Vixens? Mark Cole wrote in his Hot Car column 'Sport Scene' of February 1971 about the Formula Four and how it might become the top category in club motor racing. He gives three reasons:

[...] This means that the 1000cc Imp-engined Vixens will be seen battling it out against the Ford-engined F3s. [...] The Imps rely on good carburetion for their power. Imp expert Ian Carter estimates that with the restictor, a 1000cc Imp in full-race tune will show 103bhp - and being 80 lbs lighter than the 107 bhp Ford F3s will not be at a disadvantage. The Vixens have Knight-modified gearboxes.